In this guide I'll be covering the best AR-15 stripped lower receiver options. Later in this guide, I'll also be diving into what makes a good lower, the legalities surrounding lower receivers, and other things you should know about them. You can use the links below to jump to any portion of this guide.

As we'll cover in more detail below, you're generally fine going with the cheapest lower possible, so long as it's made from 7075 (T651) aluminum, not cast, and made by a reputable manufacturer. My go-to manufacturers for affordable lowers are Anderson, Aero Precision, Palmetto State Armory, and Spikes Tactical.

We'll start off with some of our favorite affordable options from quality manufacturers, then cover some of the more unique options that come with a higher price tag. Nothing fancy here, but Anderson generally has the cheapest lower receiver that is still high quality. I've never had any issues with an Anderson lower, nor has anyone else from what I've seen.

You can buy two or more Anderson lowers for the cost of some other options, so you may just want to stock up to save on trips to the FFL. (You and I both know you're inevitably going to build more ARs anyway.) Palmetto State Armory is famous for making super high-quality AR-15 parts and complete rifles at some of the lowest prices available. In fact, we chose them as the manufacturer of the best budget AR-15.

As always, they come through clutch with some super affordable forged 7075-T6 aluminum AR-15 stripped lowers. You can check out all their stripped lower options here. At a slightly higher cost, Aero Precision's Gen 2 stripped lower is another high-quality option that we've used in the past with no issues. Aero Precision has a good reputation for making a variety of quality AR-15 parts, as well as some good complete rifles.

It weighs less than the Anderson lower at 8.35 oz and is forged 7075-T6 aluminum. It also has a tension screw to help it mate better with your upper.

You can also find it available in FDE, OD, and other color options from their website. While the above three lower receivers will likely satisfy the majority of you reading this, I know some of you are wondering how you can shave off some more weight.

The BAD556 Lightweight Lower Receiver weighs in at just 6.84 oz, though weight will be the only thing you're saving on with it's $269 price tag. This finely machined billet 7075-T6 aluminum lower saves weight with its v-shaped magwell and other cuts that don't sacrifice the structural integrity of the receiver.

If I'm being honest, I don't think I'll be going with any AR-15 lower receivers as unique as the following options any time soon. I'm more of the type to buy a reasonably priced lower, then scratch the hell out of it because I'm too lazy to tape it up while installing parts.

With that being said, the way these tend to sell, I know tons of people like them; so check them out to see if they're your style. Your guns, your decisions!

You can also rest assured that I did my due diligence to only include 7075-T6 aluminum receivers from highly reputable manufacturers. Everything You Need to Know About Stripped Lower Receivers

There's a lot to cover about AR-15 lower receivers including legalities, materials, and manufacturing processes. We'll do our best to answer all the questions you have below.

For those AR-15 newbies out there, let's first be clear what a stripped lower receiver is.

Stripped Lowers - A stripped lower receiver is the serialized portion of an AR-15, making it the only part of the rifle that needs to be purchased through a licensed dealer (FFL). All other parts of your AR-15 can be bought online AND shipped directly to you, rather than to an FFL.

It's basically just a formed piece of aluminum that you'll eventually add all of the other lower parts to, creating a complete lower receiver. By building your lower receiver, as opposed to buying a complete lower or a complete entire AR-15, you get to choose all the parts you want. In addition to allowing for full customization, you can sometimes save money building your lower rather than buying it. For those apprehensive about building their first AR-15, building just the lower is a pretty good option; it can be done with fewer tools and there aren't as many big errors you can make than when building an upper. Personally, I'm almost always fine buying a complete upper (depending on the build purpose), but always prefer building my own lower.

This article is focused on helping you find the best stripped lower receivers, though we'll briefly touch on the other two options.

Complete Lowers - You can also purchase complete lower receivers that have all of the lower parts already installed, including: 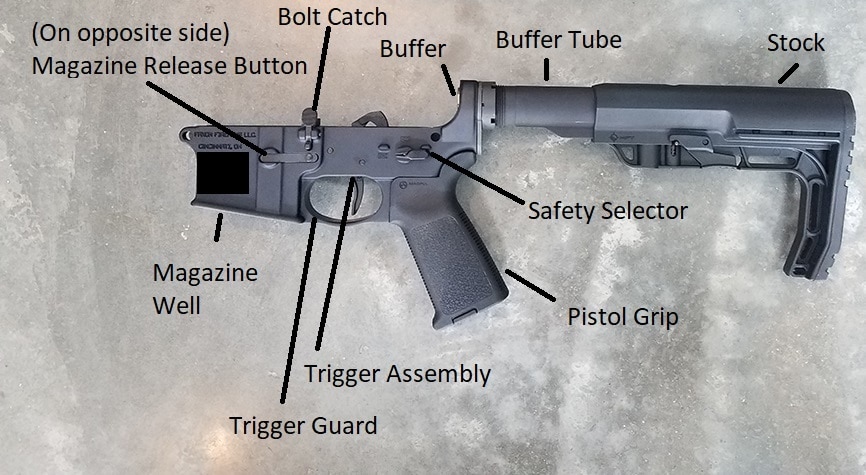 Why would you buy a complete lower receiver instead of a complete rifle?

Buying a lower receiver and upper receiver separately can help you avoid paying the firearms excise tax. Another reason would be wanting a higher-quality lower than would be available in a complete rifle with the upper you want.

80% Lowers - 80% lowers are partially finished lower receivers that are missing the drilled holes for installing a trigger and safety selector. These are legal to purchase and use for an AR-15 build in most places—but always do your own research.

80% lowers can be shipped directly to your door, rather than to an FFL, because they are not technically a firearm yet.

I personally have not messed around with 80% lowers and have no plans to. They're beyond the scope of this article, but it's important you avoid buying one mistakenly if your intention is to instead buy a stripped lower.

I want to cover both my butt and yours, so always be sure to do your own research when building a firearm.

Disclaimer: I am not a lawyer. This article should not be interpreted as legal advice. It is the responsibility of consumers and readers of this to understand and comply with all federal, state, and local laws regarding purchasing or building a firearm.

The following points are simply what I've gathered from my own personal research and what practices I follow at the time of writing this, as a U.S. citizen. I cover both information for AR-15 rifles and AR-15 pistols. This is not necessarily an exhaustive list.

Recent AR-15 Pistol Build of Mine Aluminum - Most lower receivers you'll come across will be made out of aluminum, as it's relatively lightweight, strong, and affordable.

I'm not going to lie and say I fully understand all of this, but I know enough to understand that 7075 (T651) is stronger, harder, and better. Considering you don't save much money by going with the inferior option, you might as well go with what's best.

Polymer - If you're looking for a concealed carry pistol, most options these days have polymer frames. With that said, it's probably not a good idea to get a polymer lower, even if they are often a lot cheaper.

AR-15s, compared to pistols, will put a lot more stress on the polymer, and there's a higher chance of it breaking than I'm personally comfortable with. You will not see any polymer lowers in my gun safe any time soon. If you search the internet for "broken polymer lower", you'll see that they usually break like this because all the stress is where the buffer tube screws into the lower receiver.

Titanium & Steel - If you look hard enough you can find these, but there's really not much point in getting them. Both are going to be stronger than aluminum, but steel is unnecessarily heavy, and titanium is unnecessarily expensive.

Aluminum is more than capable to be part of your "bombproof" AR-15.

There are three types of manufacturing processes for AR-15 lowers: cast, billet, and forged.

Cast Aluminum - Casting is a process in which molten aluminum is poured into a mold.

Cast lowers are usually the cheapest available option; however, many manufacturers of cast lowers have a bad reputation for poor quality control, and regardless of how well they're cast, they're still going to be the weakest lowers of all three options.

Billet Aluminum - Billet aluminum lower receivers are cut from solid blocks of aluminum, as shown in the picture below. They are stronger than cast receivers, though not as strong as forged receivers. They do, however, allow for the guard to be included in one piece with the rest of the lower and allow for some pretty uniquely designed lowers. Knowing the above, you should have a good understanding of why we recommend forged 7075 (T651) aluminum 7075 lower receivers for the vast majority of AR-15 builds. The only exception would be if you wanted a uniquely designed billet lower.

Generally, I opt for whatever is cheapest that fits these criteria, so long as it's from a reputable manufacturer. Some of you may also want to factor in small stylistic differences, like the way various manufacturers' logos look etched into the receiver.