In this guide, I'll cover my picks for the best AR-15 bolt carrier group (BCG) for a variety of build goals.

A lot is covered in this article, so those who wish to can jump ahead to any section using the following links:

What is a Bolt Carrier Group (BCG)?

For those that want to see this in action and get a better understanding of how the AR-15 functions, check out the following animation.

The bolt carrier group is made up of the following parts: While that looks pretty complex, a basic field strip for cleaning your AR-15's BCG only requires removing the:

... As is shown from my very dirty BCM bolt carrier group in the picture below.

It took me 5 minutes of washing my hands before I could get back to writing this article, but those are the sacrifices I make for good content! 😉

It should be clear by this point that your bolt carrier group is an extremely important part of your AR-15. While I'll typically try to save on things like lower receivers, upper receivers, and handguards, the BCG group is one place I tend to pay up. This is especially important for rifles that may be used to save your life, like home defense builds, combat weapons, or SHTF guns.

So what things should you look for from a bolt carrier group?

For AR-15s that I want to be 100% certain will go bang when I need them to, I always opt for mil-spec bolt carrier groups from highly trusted manufacturers.

My go-to manufacturer and choice for the best mil-spec bolt carrier group is Bravo Company (BCM). All of the parts they make are extremely high quality and their BCGs are actually proper mil-spec; they're not just using it as a buzzword.

If you don't want to take my word for it, I encourage you to look for others' opinions on BCM's BCG. It's highly recommended by forum posters, YouTubers, and nearly every review website you'll find. Additionally, it's been used by military personnel, military contractors, and police forces around the world.

Not only are BCM bolt carrier groups great, but they're also cheaper than most other top manufacturers' mil-spec offerings.

Not only is the BCM BCG the best mil-spec bolt carrier group, but it's also the best BCG for the money when you factor in its quality.

Be warned, these manufacturers' BCGs are usually a bit more expensive than BCM's, but they're also top quality:

If you're just building a rifle for range fun and are simply looking to spend as little as possible on your bolt carrier group, Brownells offers one for only $89.99.

The current trend of the AR-15 platform is to make rifles as light as possible. While I wouldn't recommend opting for a lightweight AR build for a defense rifle, lightweight builds are great for general range shooting and competitive shooting where maneuverability is key.

In addition to making your rifle lighter overall, lightweight bolt carrier groups can also cut down on felt recoil and allow you to shoot faster when used in a tuned AR-15. This does, however, bring us to the downside of lightweight BCGs...

Mil-spec BCGs can generally handle whatever 5.56 or .223 ammunition you throw their way due to their lower cyclic rate. Reducing the weight of your BCG, however, can lead to cycling issues and even more felt recoil, as the lighter BCG moves back faster with the same amount of gas pushing it back. Thus, an adjustable gas block is generally required when using low mass BCGs.

Adjustable gas blocks allow you to change/limit the amount of gas that moves through your gas tube and thus, how much gas is moving your BCG.

I've used this adjustable gas block for thousands of rounds and have nothing but good things to say about it. 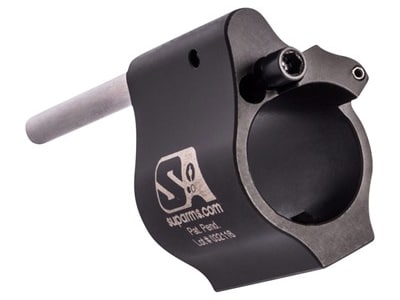 Before jumping into the best lightweight bolt carrier group, there are a few more things to keep in mind.

First of all, lightweight bolt carrier groups are not rated for full-auto fire... but chances are you don't have a full-auto rifle anyway.

More relevant to most readers of this is that some lightweight BCGs are made from materials like aluminum, which can be more likely to dent, scratch, and warp. They also have more cutouts, meaning less-solid structural integrity. Therefore, the life expectancy of one of these is likely to be shorter than a mil-spec BCG.

We'll cover some more wallet-friendly options, but we're starting off with the cream of the crop. Here are the best lightweight bolt carrier groups: JP Enterprises' Ultra Low Mass bolt carrier group is the lightest I've come accross, with the bolt and carrier weighing just 5.59 oz. They're the first company that rose to popularity for their lightweight BCGs and are extremely high quality.

The Ultra Low Mass BCG is made from 7075 (T6) aluminium, a material most commonly used for receivers.

If you're goal is to reduce the most weight possible, then this is the best bolt carrier group for you.

2A Armament's Regulated Bolt Carrier (RBC) is one of the most innovative AR-15 parts I've come across. It has a regulating gauge for gas built into the carrier itself, removing the need for an adjustable gas block. V Seven is known for fantastic lightweight AR-15 parts. Recently they've been making more and more parts out of titanium, which has a superior strength-to-weight ratio than steel. Basically, titanium can be stronger than steel but weigh 45% less.

The total weight of this titanium BCG is 7.9 oz.