Do you want a shorter weapon, without sacrificing barrel length or dealing with the hassle of obtaining an SBR? Bullpups are the answer.

In this guide, we'll explain the benefits of this style of firearm and also give you our choices for the best bullpup rifle and shotguns. 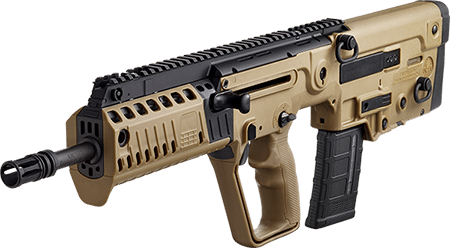 What is a Bullpup?

A bullpup is a type of firearm that has its action and magazine located behind the trigger. Without sacrificing accuracy, this allows bullpup rifles and shotguns to be shorter than traditional styled firearms with the same barrel length. 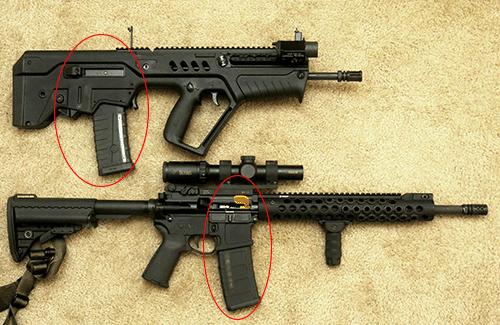 The advantages of bullpups, which we'll cover in greater detail below, have led to a number of military and police forces adopting this style of firearm. One of the most noteworthy modern examples is the adoption of the Tavor by the Israeli Defense Forces. 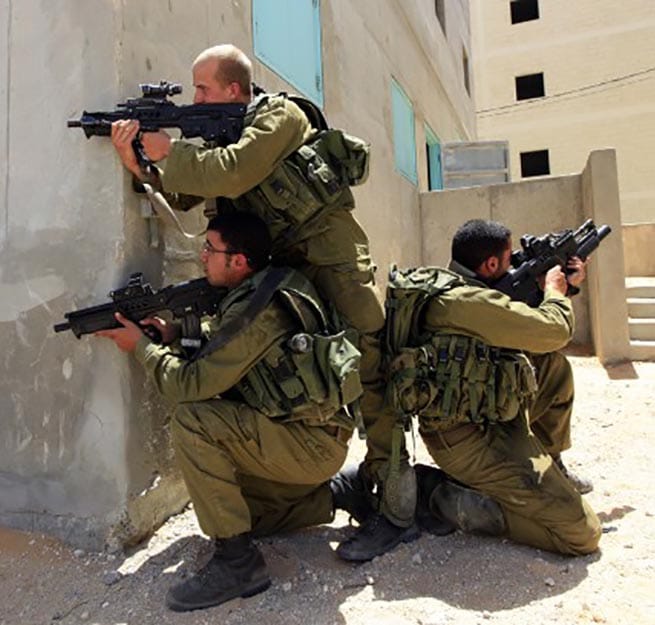 Pros and Cons of Bullpup Firearms

There's a lot to love about bullpup firearms, but they also have some qualities that have left some sticking with more traditional firearms. Here are the pros and cons of bullpups: I'm really bad at Photoshop, but you get the point.

Is a Bullpup Right for You?

Aside from being super cool, Bullpups have a fairly major advantage in maneuverability compared to traditional rifles and shotguns. Personally, I think this can more than make up for their drawbacks.

Ultimately, however, the decision will come down to your individual preferences.

Below you'll find our list of the best bullpup rifle choices for a variety of different calibers and needs:

The Tavor, more specifically the Tavor X95, was the first rifle that led many people to actually consider choosing a bullpup for serious use.

Other rifles had brought the benefits of shorter overall length, cool looks, and good balance... But the Tavor was the first to do so with a well thought out modern design and user-friendly controls. 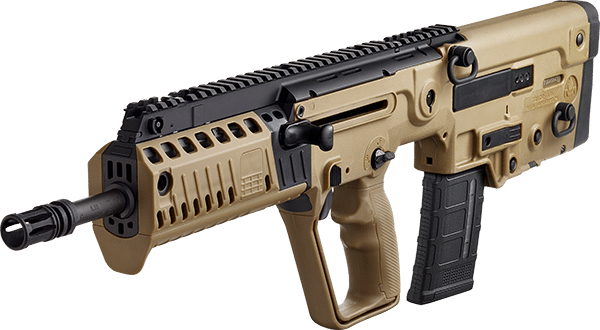 Unlike previous Tavor models, the X95 has a button style magazine release in a similar location to an AR-15. Both the magazine release and safety selector are ambidextrous. The ejection port can also be swapped to either side, making this a great choice for left-handed shooters. IWI also moved the charging handle forward to be just above the trigger.

Speaking of the trigger, it's far better than triggers found on most other bullpups. It has a 5-6 lb trigger pull. Fortunately, there's also a great aftermarket upgrade, the Geissele Super Sabra Trigger Pack that's compatible with all Tavors and X95s excluding those 308 and 12 gauge models (see the trigger pack here).

In doing so, they were able to add Picatinny (1913) rail sections at the front of the rifle in the 3, 6, and 9 o'clock positions. When you don't need to take advantage of these rails, you can keep on the rail covers shown in the picture above. This is of course in addition to the Picatinny rail that runs along the top of the rifle for mounting optics like red dot sights. The X95 also has built-in backup sights that fold down into the top rail.

The Tavor X95 is our clear number one choice for the best bullpup rifle for self-defense and general awesomeness. It gives you the benefits of a bullpup, without the major drawbacks of its competitors.

Automatic and semi-automatic X95s have been used by the Israeli army for whom the weapon was developed, as well as many other military and police forces around the world including India, Ukraine, Singapore, and Greece. Product Description: The Tavor X95 by IWI U.S. is the best bullpup rifle available today. While all rifles in this class feel nearly futuristic, the X95 has done a fantastic job of actually modernizing the controls, fit, and feel. It currently serves as the weapon of choice for the Israeli military, as well as other military and police forces around the world.

While not every KEL-TEC firearm has been great, they really hit it out of the park with the RDB.

RDB stands for Rifle Downward-ejecting Bullpup, which brings us to the first innovative feature of this rifle. The ejection port is located just behind the magazine facing the ground, eliminating issues left-handed shooters face when shooting many bullpups. Casings are ejected down at a 15-degree angle and don't affect shooting this rifle in my experience even when prone, but I wouldn't shoot this gun shirtless if I were you.

The trigger is far above average, with a crisp pull and a pull weight of ~5 lbs. The safety selector is ambidextrous and out of the way, but I'm not a huge fan of the magazine release that resembles older Tavor models and requires you to break your grip with your shooting hand.

The internal design of the RDB is incredibly simplistic and well thought out. Minimal parts have aided in this firearm proving to be reliable over time.

The last feature to note is that it comes with an adjustable gas system and generally runs very well suppressed thanks in part to the nature of Bullpups and the forward location of its gas piston.

Overall, this is an affordable way to get your hands on a well-performing bullpup, earning it our choice for the best budget bullpup.

Our next choice is a great way to get your hands on a bullpup at an affordable price. It will also allow you to shoot .22 long rifle, the cheapest ammo around.

Technically this isn't a rifle, but a conversion kit to turn your Ruger 10/22 rifle into a bullpup. Considering 10/22s are the most popular 22 rifles and that this conversion kit is pretty darn cool, I decided to include it anyway.

This kit is compatible with any 10/22 with either the standard 1/2" diameter barrel or .920 bull barrels. It is important to note, however, that your barrel should be 18" or longer. Shorter barrels used with this kit will be below the federal 26" minimum for overall rifle length.

The finished product heavily resembles a suppressed P90 if you attach the dummy suppressor that comes included. Despite the big boost in ascetics, it's still compatible with most 10/22 magazines.

The last awesome thing about this mod kit is that it's really easy to assemble. Check out the video below.

After covering a 10/22 P90 style conversion kit, why not take a look at the real thing... Or at least the civilian semi-automatic version, the FN PS90.

If you hadn't heard of our first 2 picks, you've almost certainly heard of the FN P90. It's been widely popularized in both video games and in film.

Like the Tavor, this is another bullpup that has seen a great deal of use by police and military forces around the world.

Aside from its oddball caliber (5.7x28mm) that it shares with the FN Five-Seven, its most noteworthy feature is its magazine that sits at the top of the firearm. It also has fully ambidextrous controls and ejected casings are directed downwards, making it a great choice for right and left-handed shooters.

Before moving onto the best bullpup shotguns, we have one more rifle to cover - the Steyr Aug.

Originally developed for the Austrian military in the 1970s, the AUG has been in use for 40+ years.

The latest version of the AUG is the AUG A3, which comes in a number of different Picatinny rail and optic configurations.

Steyr AUG A3 Features and Specs

While the AUG is definitely a modern firearm even by today's standards, there are some reasons it wasn't first on our list. Considering its price point, the Tavor is its closest competitor, so let's do a quick comparison of the AUG vs the X95.

While the above comparison is largely subjective, I think the X95 is the clear winner and the overall best bullpup rifle.

The Panzer Arms BP-12 is a semi-automatic, magazine fed bullpup shotgun at a very affordable price. It features a full Picatinny rail on the top of the firearm, as well as rails at the front at the 3, 6, and 9 o'clock positions.

As is the case with all magazine fed shotguns, the BP-12 can be picky about what ammo it likes, so be sure to try out some different options.

The KEL-TEC KSG is arguably the most popular bullpup shotgun. This 12 gauge pump action shotgun was first released in 2011.

Like the RDB bullpup rifle we featured above, the KSG is downward ejecting and completely ambidextrous. It's fed by two magazine tubes that you can switch between, each one holding 6 or 7 rounds depending on shell length. That puts its overall capacity at 12+1 or 14+1 rounds.

With its short length, plus its bottom and top Picatinny rails, the KSG is ready for tactical applications and home defense.

Thanks to it's proven history and great features, the KEL-TEC KSG is our current choice for the best bullpup shotgun. It's even made it's way onto our list of the best home defense shotguns.

Oh yeah, IWI in about to launch a Tavor semi-auto Shotgun too.

At the time of writing this, it's currently able to be purchased on back order for a planned July 2019 release.

Perhaps once we get a chance to get our hands on the TS12 it will become our new best bullpup shotgun.

Hopefully this guide not only helped you find the best bullpup rifle or shotgun for your needs but also gave you a better understanding of why bullpups are so great.

Our favorite rifle options are the Tavor X95 if you can afford it or the KEL-TEC RDB if you're on a budget.

As far as the best bullpup shotguns go, the pump-action KEL-TEC KSG has been the dominant player in the market, but we're excited to get our hands on the Tavor TS12 once it's readily available.