Best .357 SIG Ammo, Plus What You Need to Know About This caliber

Nowadays, gun enthusiasts the world over will tell you that 9mm is the best handgun cartridge in the world. Indeed, modern ballistics testing by agencies like the FBI seem to back-up this claim, but this wasn’t always the case for 9mm. Following the 1986 FBI Miami Shootout, the efficacy of the 9mm cartridge was brought into serious question, and there were growing concerns among law enforcement agencies across the country that 9mm didn’t possess sufficient knockdown power for defensive shooting. These concerns led to the development of several new and more powerful caliber cartridges, most notably .40 S&W and then .357 SIG.

In this guide we will be providing you with our recommendations of the best .357 SIG ammo for both self-defense and range practice. But first, I want to provide a little background on .357 SIG for those who aren’t familiar with the cartridge.

You can navigate this article using the links below: .357 SIG is a specialized law enforcement round developed in a joint partnership between Federal and Sig Sauer in 1994. The intent behind the round was to match the ballistics of a .357 Magnum cartridge, while sticking to a semi-automatic cartridge design patterned after the 9mm and 10mm. The finished .357 SIG cartridge had a slightly shorter case length than the 10mm, with a bullet diameter equivalent to 9mm. One of the things that made .357 SIG unique compared to its predecessors was that it was specially designed to have greater bullet expansion while also reaching significantly higher velocities than any other semi-auto cartridge at that time. Despite receiving public praise from the short list of law enforcement agencies that adopted the cartridge, .357 SIG was never able to rise to the same level or prominence as .40 S&W or 9mm. It suffered from a few key drawbacks: First, the cartridge had a tendency to wear down firearms faster due to being such a high pressured round. Later testing against the modern 9mm in the early 2000s also revealed that the .357 SIG offered no better ballistics and had noticeably more recoil and muzzle flash.

Despite this, .357 SIG still maintains a loyal following to this day, and many of the cartridge’s adherents swear to its efficacy. And indeed, .357 SIG does have some good things going for it. For example, .357 SIG has noticeably less recoil than .357 Magnum and even .40 S&W. On top of that, given that .357 SIG is such a high velocity round, it manages to keep a flatter trajectory over longer distances than most comparative calibers. Lastly, most .40 S&W pistols can actually be easily converted to .357 SIG by swapping out the barrel, which is a nice side benefit.

For those who enjoy the challenge of taming this obscure beast of a round, let’s briefly cover some need to know information for smart ammunition buying.

If you aren’t well versed in the world of firearms you might not know what to look for when purchasing ammo. With this in mind, let’s briefly discuss the topic of what makes ammunition “good”.

Ammo generally breaks down into two categories: hollow point or full metal jacket (FMJ). Each of these types of ammo serves different use cases. A hollow point bullet is specialized for self-defense and has the unique trait of expanding on impact. This “flowering” effect makes the hollow more lethal. By contrast, an FMJ bullet doesn’t expand. Given this, FMJ bullets are considerably less lethal. I’d recommend buying the very best hollow point ammunition you can find, regardless of price. Then use it sparingly. This means only for self-defense and occasional practice. Keep it loaded in your concealed carry or home defense firearm and hope you never need to use it. The only caveat to this is after your hollow point rounds have been sitting in your firearm for an extended period of time, it’s a smart idea to rotate them out for fresh ammo. When this time rolls around, use your old ammo at the range to make sure the gun is cycling through it without malfunction, but after that return to using FMJ.

For FMJs, you will want to hunt for the best bargains you can find while avoiding such low quality ammo that it runs the risk of damaging your gun. We've picked out some great options below as the best .357 SIG ammo for target practice.

When it comes to buying ammo online, our go-to merchant has always been Lucky Gunner. Not only does Lucky Gunner offer a wide selection of ammunition at the best prices, but they also provide ballistics gel test data results for all of their self-defense ammo. Ballistics gel testing is generally considered the best method for evaluating a cartridge’s performance and allows us to easily determine a bullet’s penetration depth and expansion diameter. Let’s briefly expand on these terms:

Penetration Depth- The FBI recommends a that a bullet’s ideal penetration depth in standardized ballistics gel testing to be somewhere between 12 to 18 inches. Any penetration shallower than 12 inches and a bullet might not reach a targets vital organs, and any deeper than 18 inches and the bullet may run the risk of overpenetration.

Bullet Expansion Diameter- As previously explained, hollow point bullets are characterized by having a flowering effect on impact. The measured diameter of the bullets expansion is an important indicator of the bullet’s overall knockdown power. When it comes to expansion, there are no sweet spots, and the more expansion the better.

It’s by collecting and comparing the ballistics gel test results of various ammunition that we are able to make our recommendations for the best .357 SIG ammo. Other factors to consider are how reliably a particular brand of ammo performs, and this is done with our own hands-on testing. No two guns are totally alike so it’s important to note that what might work perfectly for one firearm might not work as reliably with another.

Now that we’ve gotten some background information on the .357 SIG and have a clearer sense of what to look for when buying ammo, let’s begin going through our product recommendations.

Here are our top 3 picks for the best .357 SIG self-defense ammo:

Kicking off our list for our favorite .357 SIG self-defense ammo we have the Winchester Elite PDX1 125 Grain JHPs.

One of the best features of these hollow-points is that they flower open to reveal the famous “Winchester Talons”, which are known for their sharpness and lethality. As far as performance data is concerned, the Winchester Elite PDX1 achieves a solid 15.4” penetration depth with a .69” expanded diameter, which is the best from the study.

All in all, it’s hard to find anything to complain about with the Winchester Elite PDX1s. They perform great and are made with consistent quality, everything you could want from a self-defense round. 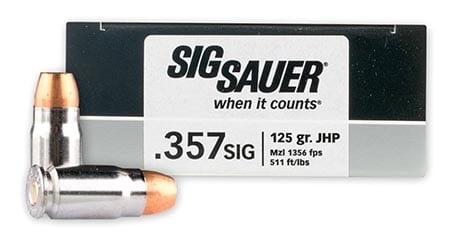 A quick look at the ballistics data on the Sig Sauer V-Crown 125 Grain JHPs and you will notice that the load performs almost identically to the Winchester Elite PDX1s in terms of penetration. The V-Crowns are trademarked for having a distinct V-Crown mushroom expansion, that makes the bullet especially lethal, though .07" less than that of the PDX1. It also uses low-flash propellant to help cut down on the excess muzzle flash .357 SIG is typically known for generating.

I’ve used V-Crowns across multiple different caliber firearms and have never encountered any issues as far as reliability is concerned, neither have I come across many negative reviews online. Another potential advantage to the V-Crowns is that they are made by Sig Sauer—the original developer of the .357 SIG cartridge. Sig Sauer are certainly experts when it comes to all things .357 Sig.

Rounding out our self-defense ammo recommendations we have the Tactical LE 125 Grain HST JHPs from Federal. These rounds tend to reach deeper penetration depths than the PDX1s and V-Crowns, running right up to the 18” ideal limit. The bullets also achieve slightly greater muzzle velocity, but less expansion, which for me is the most important factor when comparing these three loads.

As far as quality and reliability is concerned, Federal are an industry leader in the ammunition space. They offer premium rounds across every caliber, none of which have I ever had any problems with. A final upside to the Federal Tactical LEs is that they cost around half the price of the the PDX1s and V-Crowns and are generally easier to find in stock among vendors.

Now that we've covered defensive loads, let's take a look at the best .357 Ammo for range practice that you can buy in bulk to save money.

I once again turn to Federal for my primary choice for .357 SIG range ammo. There’s sometimes a temptation with range ammo to experiment with really cheap loads made from obscure manufacturers, but I find particularly with a caliber known for wearing down guns quickly like .357 SIG, it’s better to stick to brand names you can trust. The American Eagle FMJ series hits a competitive price point, and is reliable as any FMJ on the market. A great choice in any caliber.

Experimenting with Speer Lawman’s .357 SIG rounds was a new experience for me, as I hadn’t used TMJ "Clean-Fire" rounds before. Unlike FMJs, TMJ (sometimes called ‘full metal case’) bullets have a fully covered copper plating. These rounds are often used for Match shooting as they are reported to have better accuracy. They also have some health safety benefits in that the fully covered bullet means less exposure to potentially dangerous lead contamination that comes from exposed traditional rounds.

While I myself didn’t notice any accuracy improvements from using the Speer Lawman TMJs compared to the Federal American Eagle FMJs, I can say that the round performed reliably over the course of a thousand spent cases. Ultimately I'd say just go with the cheaper option, which is usually the Lawman ammo.

That wraps our guide on the best .357 SIG Ammo. As mentioned in the introduction, .357 SIG is a fairly obscure round these days, but if you’re a fan of this cartridge you can’t go wrong with the loads listed above.

Winchester Elite PDX1 Defender is our choice for the best .357 SIG self-defense ammunition. Based on our analysis of Lucky Gunner’s ballistic testing, this load outperformed all other .357 SIG ammunition when taking into account penetration, expansion, and velocity data. It also has performed well in our own reliability testing.

Ammo Recommendations for Other Handgun Calibers: